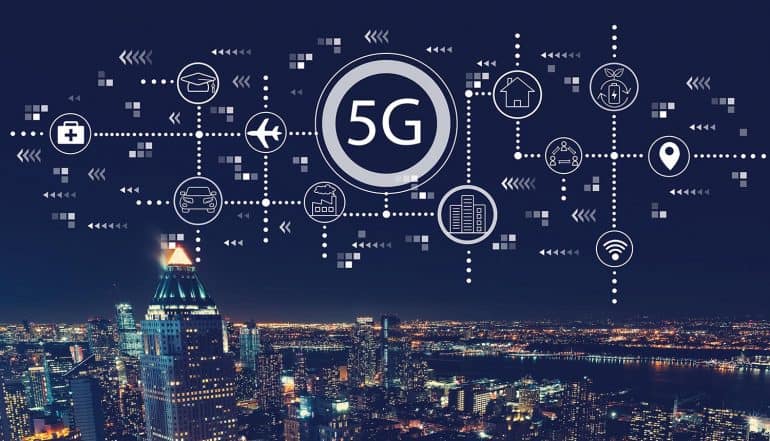 5G and the Future of Cybersecurity

Sign up to see when 5G is coming to you!

Just as 4G networks led to the ubiquity of the smartphone and other smart devices, 5G networks will lead to the rise of billions of new devices connected to the Internet, all talking with one another at incredibly fast speeds with remarkably low latency. This will open up vast new possibilities for consumers, businesses and society as a whole – everything from self-driving cars on the road to the ability for doctors to conduct remote surgery from anyplace in the world.

At the 2019 CES in Las Vegas, for example, Verizon CEO Hans Vestberg laid out a compelling vision for 5G, noting that it would help to bring about “the Fourth Industrial Revolution.” There are many technologies today powering this Fourth Industrial Revolution – everything from artificial intelligence and robotics to the Internet of Things (IoT) and virtual reality – and all of them are being given a push forward by 5G. AI, for example, is making it possible to create self-driving cars, while the IoT is making it possible for smart devices to become ubiquitous, both in the home and within the enterprise.

To highlight the various ways that Verizon is already starting to make this 5G future a reality, Vestberg invited a number of key technology partners on stage with himself, including top executives from the New York Times, Walt Disney Studios, and drone company Skyward to showcase some of their best 5G projects. The New York Times, for example, is the middle of creating a new 5G journalism lab to support data-intensive technologies such as VR and AR, while Skyward is making it possible to control as many as one million drones from anywhere in the world. (And, indeed, during his CES keynote, Vestberg piloted a drone based in Los Angeles while on stage in Las Vegas)

Cybersecurity concerns in the 5G world

And, yet, this exciting new 5G world will encounter its own share of cybersecurity challenges. Hackers and cybercriminals in the world will still look for ways to access user data and profit from it. With billions of devices connected to the Internet, they will have an incredibly large attack surface in which it will be much easier to find the proverbial “weakest link” in the security chain. Geoffrey R. Morgan, Founding Partner at Fairchild Morgan Law, suggests that, “The exponential increase in speed, density and efficiency afforded by 5G technology will cause a dramatic rise in cybersecurity concerns, particularly by those industries that are among the first to utilize it.”

Moreover, the ability of hackers to cause harm and destruction will also mount exponentially. In today’s 4G world, a huge botnet formed by hacking into user devices in the home could be used to mount large-scale DDOS attacks on websites; in tomorrow’s 5G world, that same botnet could be used to take out an entire network of self-driving cars in a single city, leading to mayhem on the roads.

Obviously, then, cybersecurity is just as much a concern in the 5G world as it is in the 4G world – and perhaps more so. Vast amounts of remote sensors and smart devices hooked up to global supply chains, for example, will radically increase the complexity of securing corporate networks from intruders and cyber criminals. And the sheer amount of data being created by 5G networks will make it much more difficult to spot anomalies in user behavior resulting from hackers. According to one estimate, for example, the data output of a single autonomous vehicle in one day will equal the daily output of 3,000 people.

The 8 currencies of 5G

The good news is that 5G is still so new that there is time to make security a priority. That, says Verizon CEO Hans Vestberg, is one reason why the company has come up with the idea of 8 “currencies” for 5G. These currencies – peak data rate, mobile data volume, mobility, connected devices, energy efficiency, service deployment, reliability and latency – all represent key features of the Verizon 5G network that make it completely unlike anything we’ve seen before. For example, “peak data rate” refers to the ability to generate speeds of up to 10 Gbps, while “mobility” refers to the ability to stay connected while moving at speeds of up to 500 km/hour.

In the 3G and 4G world, the way that companies thought about their networks was in terms of two simple currencies: speed and throughput. In other words, how fast can you make uploads and downloads, and how much volume can your network handle at any point in time? But in a 5G world, companies need to expand their thinking from two currencies to eight currencies. Doctors and healthcare professionals, for example, place a tremendous value on “latency”: when they are doing remote surgeries, it is absolutely critical that end-to-end latency is as close to zero as possible. And, given the challenges posed by climate change, enterprises are much more aware of the value of the “energy efficiency” currency when it comes to 5G networks.

Using the 8 currencies of 5G to power future cybersecurity innovations

By taking this big picture view, it is possible to consider how the 8 currencies of 5G will have a positive impact on how we address cybersecurity issues in the future. Since 5G is not simply a faster version of 4G, but rather, an entirely new network architecture, it opens the door to entirely new security models for user privacy, identity management, and threat detection. For example, Hed Kovetz, CEO & Co-founder at Silverfort, notes that, “The 5G system incorporates secure identity management for identifying and authenticating users to ensure that only the genuine user can access services. Its new authentication framework enables mobile operators to choose authentication credentials, identifier formats and authentication methods for users and IoT devices.”

Moreover, the “mobility” currency, or the ability to stay connected while traveling at very fast speeds, means that it might be possible to create virtual security environments that travel with us as we move from point to point, regardless of which device we use, through the use of virtualization and cloud technologies. In fact, Robert Arandjelovic, Director of Product Marketing (Americas) at Symantec, suggests that, “A transition to 5G could lead to the complete obsolescence of the network perimeter. With the growth in cloud services and applications, the erosion of that perimeter has already begun… In a hyper-connected, non-perimeter world, the cloud and the endpoint become the new place where security technologies can be deployed to keep people safe.”

The “mobile data volume” currency means that emerging technologies that rely on vast amounts of data – such as machine learning and artificial intelligence – can now be deployed to create new AI-powered cybersecurity solutions. One idea that is gaining traction, for example, is using AI to spot anomalies in user and system behavior. This acts as a form of automated threat detection and mitigation, and helps to reduce the current dependence of 4G networks on user names and passwords as a way to keep users safe.

In many ways, AI cybersecurity solutions would benefit greatly from 5G. Aaron Bugal, Global Solutions Engineer at Sophos, notes that, “5G connectivity could help the way in which information integral to making a security decision is transported to the automated processes and people who need it. An example of this would be the ongoing benefit to artificial intelligence platforms that will only work best when they have as much information as possible to digest and learn from. Especially when they’re tasked with identifying unusual behavior across an organization, most of these platforms feed off data local to them, with devices that are remote or mobile unable to properly feed (upload) to these systems and typically exposing a short fall in awareness. 5G could unlock more data to get to an AI security platform in a shorter time and allow for best understanding of the organization and faster and accurate prediction of a security event.”

To help innovators come up with new 5G cybersecurity solutions, Verizon has launched a “Built on 5G Challenge” that offers a $1 million prize for a truly unique idea that builds on top of the 8 currencies of 5G. The “Built on 5G Challenge” will begin accepting submissions in April, with the winning team announced during Mobile World Congress Americas in October. For security researchers around the world, this could become a unique opportunity to make cybersecurity an enabling technology, rather than simply a “tax” on innovation. If the New York Times and Walt Disney Studios are creating their own showcase 5G labs, why can’t cybersecurity researchers also create their own 5G labs and launch innovative new products that use 5G?

Clearly, there is enormous potential for 5G to change how we address cybersecurity issues in the future. Many of the best technologies today – especially artificial intelligence – can be fully leveraged on these super-fast, low-latency 5G networks. As Verizon CEO Hans Vestberg noted at CES, “5G will change everything.” And that, of course, includes cybersecurity.

Sign up to see when 5G is coming to you!