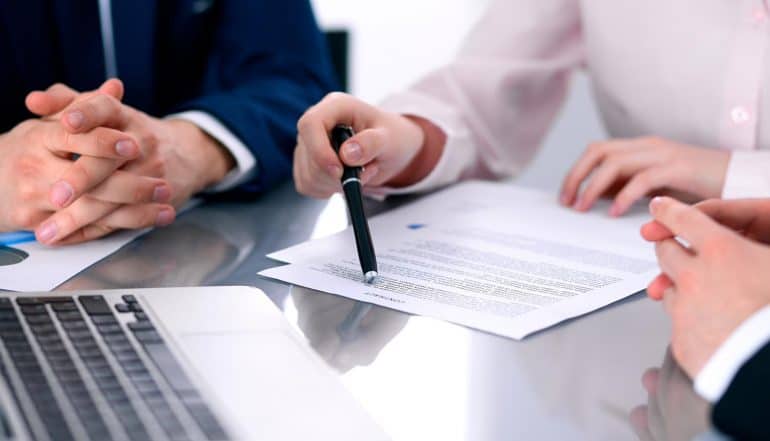 Lurking Pitfalls for the Unwary in the Blockchain Contract Era

The Internet and media sources are awash with articles discussing the application of emerging blockchain technology across various industries such as insurance, food production, diamonds and other precious minerals, transportation, taxes, real estate, and banking – to name only a few.  Numerous industry groups exist to shepherd the introduction of this technology on a broader scale and beyond the applications currently envisioned.  Of particular interest is how this technology will usher in an era of blockchain contracts.

One cannot discuss blockchain without tipping the hat to the explosive growth of cryptocurrencies such as Bitcoin and Ethereum and their growing acceptance as a form of payment and investment.  Even the U.S. Congress has jumped into the ring, forming in 2017 the bipartisan Congressional Blockchain Caucus whose focus is on “the advancement of sound public policy toward blockchain-based technologies and digital currencies.”

What is blockchain?  A true discussion on the nature of blockchain technology is beyond the scope of this article.  Hundreds of articles and white papers written by such authors as international banking institutions (such as UBS), multinational insurers (Swiss Re), government entities (U.S. Federal Reserve Bank, the European Central Bank), and consulting firms (KPMG, Sapiens, McKinsey & Company) discuss and analyze the technology in full detail.  As the Congressional Caucus puts it, blockchain is a “decentralized distributed ledger that is the main technology powering cryptocurrencies such as Bitcoin and Ethereum. By using math and cryptography, blockchain supplies a decentralized database of every transaction involving value. This creates a record of authenticity that is verifiable by a user community, increasing transparency and reducing fraud.”  In essence, the technology allows everyone to work from the same electronic ledger, similar to a shared spreadsheet, but with the added benefit that all participants have equal ledger entries from start to finish.  Each entry in the ledger, the blocks in the blockchain, are added to the more recent block, thereby forming the chain.  Once a block is added to the chain, it becomes “immutable” or unchangeable – which can be a double-edged sword.

The widespread majority of publications extol the expected benefits blockchain offers various industries, particularly in its ability to “increase transparency and reduce fraud” as Congress stated.  The technology offers automatic execution of contract terms without human intervention, elimination of duplication of tasks, algorithmic based security yielding a virtual elimination of fraud, and redundancy of information via the distribution of the ledger.  A review of these publications leaves a reader thinking – sounds great, but is it really all that it’s cracked up to be?  We know that blockchain has its technological challenges, including the need for substantial computing power and its attendant power generation needs, the lack of adequate computer processing speeds causing cumbersome computational times, and delays in network data transmission rates.  A full discussion of these tech challenges is beyond the scope of this article but their potential impact to a business’ adoption of blockchain is not inconsequential.

Going beyond the technological benefits and challenges, what are some potential legal concerns with blockchain contracts?  Generally speaking, in any contract dispute the party seeking to recover for a violation of the contract’s terms (in legal parlance, the “breach”) must provide the following evidence:

Courts are well steeped in resolving disputes over written contracts, including all the procedural requirements pertinent to that process of proving the existence of the contract and its relevant terms.  How will courts handle disputes involving blockchain contracts which are computer code driven?  One such issue is how are the blockchain contract’s terms presented to the court?  If the parties did not memorialize in writing the electronic contract’s terms, one can easily envision that the process of proving the electronic contract’s terms will be cumbersome and require the witness testimony from the coders or programmers, all of which will drive up litigation costs and delay the process.  Even if parties have a written memorialization of the blockchain contract, which version controls if a difference in terms arises between the written memorial and the blockchain contract?  Will courts simply defer to the written memorialization even when the parties intended the blockchain to control?  Again, meeting the legal standards necessary to prove a claim – or defend against one – are potentially time consuming which translates into increased legal costs and potentially increasing the uncertainty already present in contract dispute situations.

Let’s assume the plaintiff is successful in convincing the court to move forward with the lawsuit and the case proceeds to trial.  How are the blockchain contract’s terms presented during the course of the trial?  Unlike a trial involving a written contract, in which the terms may be shown to the jury during witness testimony for everyone to read, presenting the terms of a blockchain contract to a jury poses new challenges for trial attorneys and their clients.  One would expect very few jurors would have the ability to understand the code comprising the blockchain contract.  Thus, trials involving such agreements are likely to require more technical testimony (i.e., by experts), further enhancing the legal expenses.

The trial is concluded and the jury decides – yes, there was a breach of the blockchain contract’s terms.  What fix (the “remedy”) does the jury or court award?  Blockchain contracts are designed to be self-executing without the need for human intervention (or minimal involvement).  If the electronic contract was intended to be long-term, how does the court reform or rewrite the terms if that is the remedy so that going forward the revised blockchain contract complies with the court order?  In a traditional written contract case, the judge might enter an order directing the rewrite of particular terms.  Are courts capable of directing specific rewrites to computer code?

One can envision other factors that complicate a court’s efforts to resolve blockchain contract disputes involving the contracting parties.  But now we move beyond considering legal issues between the contracting parties to consider how the actions of non-parties potentially impact the interests of the blockchain contract parties.  Shortly after the advent of cryptocurrencies, the media reported on the hacking of the payment structures (so called “electronic wallets”).  The first high profile hack resulted in the 2014 bankruptcy of the Mt. Gox bitcoin exchange following the theft of $470 million in customer bitcoins.  This news took the shine off bitcoins and their presumed blockchain-based security.  Other high profile thefts occurred after the Mt. Gox collapse, but the forward progress of blockchain-based transactions continued to grow.  What these reports achieved is to open the eyes of the corporate world to potential exposures posed by non-parties to blockchain contracts.  Who bears the legal liability if two parties enter into a blockchain contract and there’s no dispute between them as to the terms, but a non-party disrupts performance by hacking the computer code forming the basis of the electronic contract?  The potential for recovering from the hackers is very low, as criminals engaged in such conduct are likely beyond the government’s jurisdictional reach.  If one party completed its performance under the contract before the hack, it is likely to demand the other contract party complete its contractual obligations.  If the hack results in the loss of the subject matter of the blockchain contract, then the parties might be unable to complete the contract (i.e., performance is “frustrated”), resulting in damages.

As blockchain technology is deployed into more areas across various industries, the adaptability of the technology to different scenarios is becoming more apparent.  Of course not all applications of the technology are for legitimate purposes.  A recent German university study of various blockchains found the nodes within the chain contained “unintended content” such as child pornography and other illegal material. [A1] Another media report noted the occurrence of hacked internet advertisements on legitimate websites that employed malware designed to “mine[A2] ” (i.e., generate new) cryptocurrencies.  Clearly, criminals and criminal elements are probing the technology for means to exploit legitimate commercial electronic agreements for illegal purposes.  While the technology’s advocates remain steadfast in their view that blockchains are secure, one cannot underestimate the creativity of these illegal efforts and their potential impact on legitimate commercial enterprises.

Beyond the technology benefits and challenges, what are some potential #legal concerns with #blockchain contracts?Click to Tweet

For example, if two parties enter into a blockchain contract and the nodes in that contract are found to include child pornography, what is the effect of that finding on the legality of the contract itself?  The U.S. Department of Justice website notes that “electronically stored data that can be converted into a visual image of child pornography are… illegal… [and] [f]ederal law prohibits the production, distribution, reception, and possession of an image of child pornography.”  Thus, the mere possession of such images is a crime in the United States.  If those images reside on the blocks within the blockchain contract, whether because of hacker activity or the actions of a party to the contract, the possibility exists a court might rule the contract is a legal nullity because it includes illegal “terms”.

Too soon to tell

Blockchain technology is proving to be highly malleable, capable of being adapted to a multitude of situations, including those not presently envisioned.  As with seemingly all computer-based applications, blockchain is not without its risks and challenges, including those impacting on the legal interpretation of such agreements.  Contract disputes will take on an entirely new set of challenges and complexities in the blockchain era, not only to the court but also the parties.  It is simply too soon to predict whether this technology will bring order to the realm of contract interpretation and enforcement, or open Pandora’s box resulting in a further strain on the court system and unforeseen pitfalls for contracting parties because of the complexities involved.